Showing posts from December, 2011
Show all

Mastering the tools, a first step on the journey of an online facilitator! 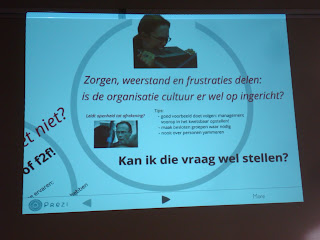 In the end of November 2011, the first part of the course 'Social Media for organisationalchange'  was completed with a f2f meeting at Maliebaan45 in Utrecht, The Netherlands.   For a period of two weeks eleven participants practised with a number of social media tools, which are applied for organisational learning and change processes.  Twitter, Linkedin, Facebook, Google plus, Houtsuite, Prezi,Spiderscribe, Delicious,  Twiddla and Yammer were some of the major tools which were applied for practise.  Experiences about ad- and disadvantages were shared at a Ning Discussion platform.

Practise with tools Three groups, all organised in a virtual summerhouse, selected a tool to present.   Two groups presented their experiences with Yammer. The tool is userfriendly, easy applicable and has a lot of functions which foster discussions. It has some similarities with Facebook and Twitter. 'Yammer is a tool that is renewing itself continuously' adds Sibrenne Wagenaar, one of the…
Post a Comment
Read more
More posts